Kallithea was founded in 1925 from refugees that came to Greece after the Mikra Asia's destruction. Before the installation of refugees in the region there was a ranch in function, which belonged to Russian monks. The first refugees created a small village with the name New Maltepes. These residents dealt with the agriculture and the cattle-breeding. In the beginning of the decade 1950 the village was renamed in New Kallithea, due to the exceptional view that it has.

Today, the residents deal primarily with the tourism while at the same time new residents have settled from various parts of the country. 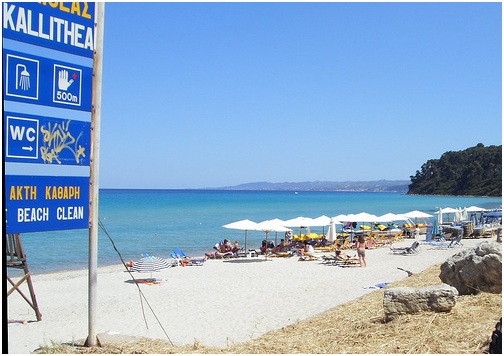 Kallithea has lots of beautiful sandy beaches with very clean waters and important archaeological or other sights. In one of its beaches is a sanctum in honour of Ammona Zefs. Near it is the Russian-style church of Saint Panteleimona as well as a big for that period (1850) invention, an irrigatory channel. Kallithea is found in a distance of 85 km from Thessalonica.